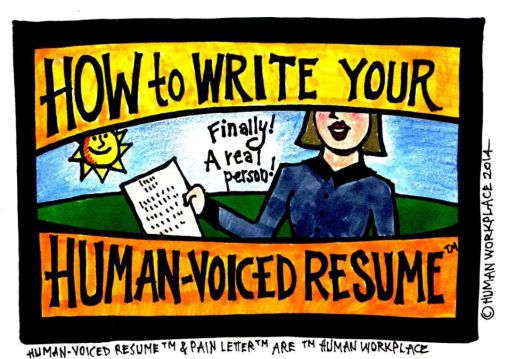 How to Write a Human-Voiced Resume

Imagine that your friend tells you "I'm meeting with a guy I know who's the VP of Marketing at that up-and-coming startup, Appliantology Inc. He and I are having lunch at Chez Bruyant down the street. If you stop by our table at 12:15 I'll introduce you, and you and he can chat for a moment."

You jump on the offer. You're excited to meet the Marketing VP, if only for a moment, and especially via an introduction from your friend who is so credible and who regards you so highly.

Here's the question you'll ponder between now and your mini-introduction at Chez Bruyant: what will you say to the Marketing guy when you meet him? What would you most like to convey in one or two minutes, to let the Marketing VP know who you are and how you could help him?

What to say to a prospective hiring manager is the burning question for every job-seeker.

"Oh wow, look here, this guy is a Results-Oriented Professional. I've never seen one of those before!"

When we repeat the same old tired cliches that every other job-seeker uses in his or her resume, we diminish our own power -- and worse than that, we sound like everyone else.

The whole point of branding is to sound like ourselves, not every other monkey in the barrel!

I know what you're thinking. "But Liz, those Applicant Tracking System Black Hole systems want to see my resume stuffed with keywords."

I'm glad you brought that up. You are done with that Black Hole nonsense. Those systems don't work. Your likelihood of hearing back after lobbing a resume into the Pit of Resume Death is about the same as your odds of winning the lottery for ten million dollars.

I take it back. Your odds of winning the lottery are better, because by law the lottery commission has to pay out. Employers don't have to hire anyone. They don't have to invest the eight-tenths of a second that it would take them to reply to your resume pitched into a Black Hole.

That channel is useless for job-seekers, and my advice is to abandon it, pronto.

Employers don't talk about the Business Pain in their job ads. If you read the job ad unskeptically, you might get the idea that this employer has no problems at all and that everything is hunky-dory and perfect throughout the company. You might start to believe that the employer was doing you a favor by considering you for employment.

Don't believe that nonsense. If there were no pain, there wouldn't be a job ad! Why do companies hire people -- for their health? No. They hire people when the cost of hiring a new person is much less than the cost of the Business Pain they're already experiencing.

Your job is to identify that Business Pain, not exactly, but in general, and mention it in a Pain Letter that you'll send directly to your hiring manager's desk through the postal service.

Yes, the most effective job search channel in 2014 is the old-school letter sent in the mail!

You can't send a Pain Letter by itself. You'll send it with your Human-Voiced Resume stapled to your Pain Letter with one staple in the upper left-hand corner.

Imagine that you're a busy hiring manager with just one precious job opening to fill. It's imperative that you hire someone smart and nimble, someone who understands what you're up against and has been there. Who are you going to look at most seriously: the sheepie candidate whose resume arrives in a resume pile spewed out of your company's Black Hole, or the candidate who took the time and initiative to research you and your firm and write to you directly - not about him- or herself but about you and your business issues?

That's why Pain Letter-Human-Voiced Resume packets sent through the mail work so well. The manager is in pain, s/he opens the day's mail, and look! Here is Doctor You with the morphine.

A Human-Voiced Resume starts with a Summary. The Summary is the most important part of a Human-Voiced Resume, because it frames your background and your next career steps for the hiring manager's benefit. Once your reader (your hiring manager) reads your Summary, he or she understands who you are and how you roll. Your job history follows the Summary and amplifies the frame you shared in the Summary.

You won't list tasks and duties in a Human-Voiced Resume? Who gives a fig about your tasks and duties? What's important is what's in your wake at each job. What did you fix, discover, create or upgrade at each assignment? How did you leave your mark on the place?

First, you'll explain what was missing or broken. Next, you'll share your solution -- what you did to solve the problem. You'll finish a Dragon-Slaying Story with an explanation of the impact of your smart thinking and your actions. We want to let the manager know why your solution was the right one for the situation!

You won't use self-praising terms like Savvy, Seasoned, Innovative, Disruptive (sorry - threw up in my mouth there a bit as I was typing) or Creative in a Human-Voiced Resume. You aren't going to stoop to praise yourself. Only fearful people do that. You're simply going to tell your story.

What if a hiring manager has a stick lodged where it shouldn't be and doesn't appreciate your direct approach? What if someone is miffed that you skirted the Black Hole tar pit and took communication with your future boss into your own hands? In that case you won't hear from them. That's a good thing! You can cross that manager off your list.

Only the people who get you deserve you. Not everyone will get you! That's okay. Your brand, like every brand, is a magnet. A magnet has two poles. Your goal is to attract the right people and repel the rest!

Here is an excerpt from a Human Workplace 12-week virtual coaching group lesson. This excerpt includes a sample Human-Voiced Resume for job-seeker Melissa James, and an explanation of the most significant differences between a traditional resume and a Human-Voiced Resume.